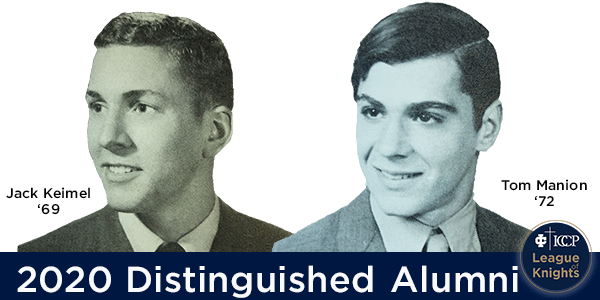 The Distinguished Alumni Award was established to recognize IC Catholic Prep graduates that have continued to promote our school spirit and demonstrate dedication to our vision, to educate students capable of learning, leading, and serving. The presentation of this award is held every other year during Catholic Schools Week.

IC Catholic Prep (ICCP) is proud of the success and accomplishments of so many graduates. It is a privilege to recognize those graduates who have excelled in their respective careers or service to others, with this award.

During Catholic Schools Week (January 27-January 31), we will be honoring multiple alumni for their contributions to IC Catholic Prep and their communities.

Jack was nominated by his fellow 1969 classmates for his dedication over the past 13 years to the research and development of gene therapies to treat lysosomal storage diseases–50 rare inherited metabolic disorders–as the President of New Hope Research Foundation. He established the foundation in 2006 with Ellen Kraft, after becoming frustrated by the lack of funding and research towards cures for rare diseases. Jack and Ellen have two sons with Adult Tay Sachs Disease, a rare neurodegenerative disorder.

Upon graduating from Immaculate Conception (IC), Jack earned a bachelor degree in Electrical Engineering from the University of Notre Dame followed by a master degree from the University of Minnesota. He went on to serve our country as a captain in the US Air Force and then proceeded to lead research and development programs at Medtronic, Inc., a global medical technology company, for more than 31 years. He held various positions of leadership, including Vice President of Research & Advanced Concepts and Vice President of Systems Operations managing the design, development, and manufacture of implantable cardiac defibrillator systems. Due to his work, he currently holds 25 US patents for heart related devices.

Jack has received recognition and awards for his research and development in the medical industry throughout his career. In 1990, he received the Medtronic Wallin Leadership Award for his work in developing the PCD implantable defibrillator product line followed by induction into the honorary Bakken Society in 1997 for his technical contributions to Medtronic. He was also inducted into the College of Fellows of the American Institute for Medical and Biological Engineering in 2004.

Tom has been an avid supporter of IC Catholic Prep. He has served on the Board of Directors from 2005-2012, the Boosters Club from 2001-2015, continuously supports multiple school fundraisers and has provided scholarships to ICCP students. Upon graduating from Immaculate Conception, Tom earned an associate degree from the College of DuPage and attended Northern Illinois University.

Tom has continued to be an important part of the ICCP Community, both as an alumnus and as a parent when his children Michael ’05, Mary Kate ‘09, Colleen ’11, Rory ‘14, and Molly ’15 attended IC Catholic Prep. In 2000, he organized a tribute for former IC football coach Jack Lewis, with over 250 alumni football players in attendance.

He initiated the incoming freshman party, which continues to this day as a way to welcome new students and their families to IC Catholic Prep. He has provided support to school activities from donating gallons of orange juice and dozens of donuts to the football pancake breakfast to providing uniforms for girls softball. Most recently, Tom has helped increase the exposure of ICCP by securing in-kind advertisement from J&B Signs to display ICCP digital signs on I-290 and I-294 to assist with reaching prospective families.

IC Catholic Prep invites you to submit a nomination for the Wall of Honor Award.

The Wall of Honor Award is bestowed bi-annually upon individuals whom have made an enduring impact on IC Catholic Prep. The next award will be announced in January 2021.

In your nomination, please include information about how the nominee exemplifies the IC Catholic Prep mission: